“Meat and Potatoes – They’re a staple for the tables in the most rustic cottages as well as the fanciest banquet tables – and it’s also an idiom meaning a staple or the most basic parts of something. Make a historic “meat-and-potatoes” recipe – however you interpret it.”

Discovering the challenge Historical Food Fortnightly was an exciting moment for me. It allowed me to do three of my favorite things – read history, research and cook! I excitedly looked at all the challenges and pored through my collection of vintage cookbooks. I have been blessed, just like my Grandma Myrtle, in that I can read a cookbook like a novel – reading the ingredients and how to put the dish together, imagining the combination of flavors and textures, smelling the outcome with the olfactory portion of my memory. As I looked, and read, and imagined the recipes I could use for each of the challenges, I decided I would use the cookbooks I personally own for as many of the challenges as possible.

The first cookbook I decided to use was “The Every-Day Cook-book and Encyclopedia of Practical Recipes” by Miss E. Neil, published in 1892. I purchased this gem at an auction that was JUST COOKBOOKS!!!! I thought I was in heaven that day. I was competing against ladies that looked like my grandma for all these different cookbooks and they were cut-throat! Don’t let that white hair fool you. Those ladies were just as serious about their purchase of cookbooks as a heart attack. And I know the auctioneers were surprised at the intensity of the bidding. At the end of the day, I was able to come away with Miss Neil’s guide. As I looked over my collection, I came to the conclusion that a basic cookbook would be the perfect choice for a basic meat and potatoes dish.

I decided after reading through the directions that I would need to precook my meat, which I chose as a three pound chuck roast, due to the fact the baking would need to be short, just long enough to warm the dish. Because I was making this for Sunday dinner, I decided to use my crock pot for the cooking of the meat. I only added a little salt, pepper and water with the roast in the crock.

While my potatoes were boiling, I set in to mincing the meat. Basically, I just sliced it across the grain in half inch slices, and then separated the meat fibers so it was loose. I covered the bottom of the pan with the meat and added the pinches of seasonings according to the directions. My very sharp chef’s knife, which I refer to as Jason, made quick work of the task. 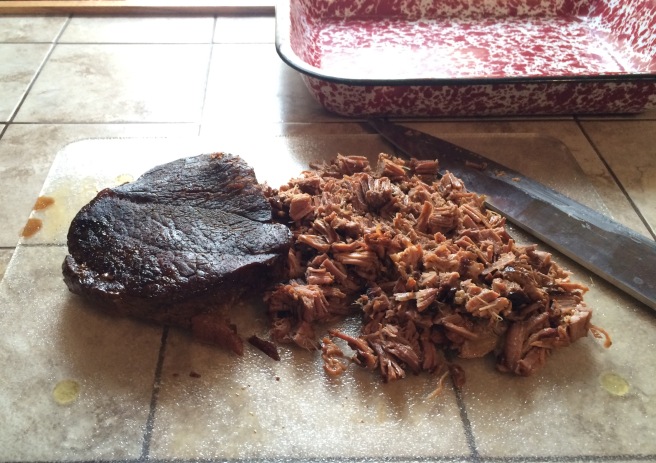 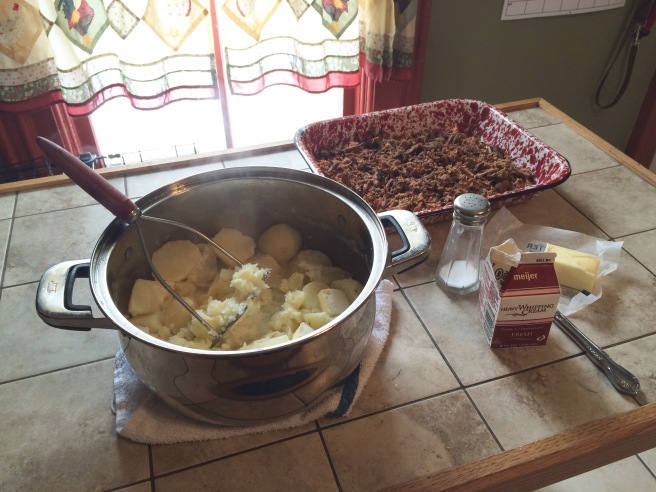 I used two and a half pounds of potatoes along with a half pint of cream and four tablespoons of butter and a couple shakes of my salt shaker. They mashed beautifully.

I covered the meat with the mash, and then whisked an egg and about a quarter of a cup of cream to pour over the top. 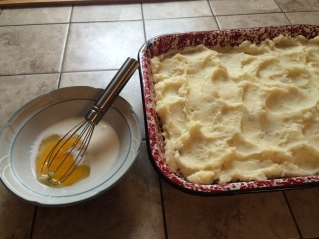 At this point, I covered it with foil and transported it to my parents’ house. They knew I was bringing Sunday dinner, and they knew I was using them as the guinea pigs to my first HFF challenge. I asked my mom to preheat the oven to 350 F, and put the pan in for about 15 minutes. After checking the top to see if it had browned yet, I decided that I needed a hotter oven so I upped the temperature to 425 F, resulting in a nice toasted top after 10 minutes.

My family eagerly dug in for dinner. Everyone liked it. My mom said she would give it an A.

What they liked – the enhancement the addition of cloves gave to the beef. I have never added cloves to meat. I have always seen it as a dessert-type of spice. However, after this dish, I think I will experiment a little more in using it for savory dishes.

What they didn’t like – it seemed kind of dry. My husband added extra butter to the top. I had planned on using my drippings for a gravy to accompany the dish, but had forgotten to make it during my preparation time. I definitely think it needed it, and it would be an easy addition to make.

So here it is…

The Challenge: A meat and potatoes dish.

The Recipe: Was found in The Every-Day Cook-book and Encyclopedia of Practical Recipes by Miss E. Neil.

The Date/Year and Region: The book was published in 1892 by Regan Printing House in Chicago, IL, so I believe this recipe would be considered Upper Midwest.

How Did I Make It: See above.

Time to Complete: It took approximately 90 minutes to make this dish. That includes my oven temperature adjustment and extra time, but does not take into account the overnight cooking of the roast in the crock pot.

How Successful Was It? It tasted good, and looked great. If I were to make it again, I would increase the amount of cloves I used. I had followed the directions and used a pinch, but I would have liked it just a little more spicy. I also would have made gravy to serve with it.

How Accurate Is it: I used a crock pot for the roast, an electric stove for the potatoes and a gas stove for the completion. But those potatoes were mashed by hand – no mixer for this girl!

Next up – Culinary Vices! I’ll be cooking for you soon!